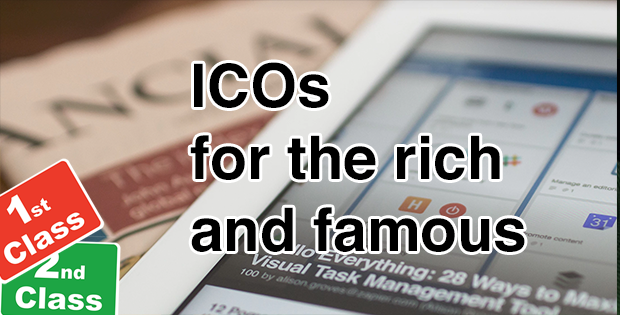 Mega ICOs aren’t new nowadays and records are broken on a monthly basis, but something was different with the last one. Filecoin was an ICO that was held on angel.co. It is an online platform well known around the traditional Silicon Valley model-based startup ecosystem, where money is raised via angels, funds, and VCs. All the famous boys are there and it’s a kind of exclusive club.

I have a problem with what happened with that Filecoin ICO, as they are now adopting and utilizing—beside the usual equity model—the ICO model as well. In my opinion, there is a kind of first class and second class ICO market building up and Johnny Average cannot participate in that 1st class ICO market.

Interestingly enough, most ICOs nowadays are excluding Americans from participating in them, so for Americans, it is literally only possible to participate legally in the ICO model via the angel.co platform and invest in only those projects that do their ICOs via them. Besides that, they need to be an accredited investor (more about this later).

What is the problem with that and are we responsible for it?

The problem we have at the moment in the free market is where even Johnny Average can invest his $10 to $100 USD into an ICO if he is quick enough is Greed and people attracted because of the wrong reasons.

Companies have heard they can raise a lot of money via an ICO, and “investors” have heard you can make a lot of money with ICOs. But the reality is, most of those projects that are coming out will go nowhere and are most likely just released for the sole purpose of collecting money. A lot of the companies that are doing ICOs have nothing more than an idea and a website, but no proper company behind them despite a legal framework nor proof of concept or line of code. Yes, there are exceptions, but I assume about 80% of the ICOs have nothing more than hot water bubbling and see where it goes.

What is an accredited investor?

According to angel.co, to be able to take part in any ICO via its platform you need to be an accredited investor, which means you need to be able to prove you have $200,000+ USD income or $1,000,000 USD net worth, which I assume most of the people in the crypto and ICO space cannot bring to the table.

The problem I am seeing is those “accredited investors” get in early and buy up the assets via ICOs. Once listed on the exchanges, Johnny Average can sneak up the token already for a premium. I think you get where I am going from here. With steps like this, the ICO model becomes something like the IPO model is already—those big dogs (the banks) in the case of IPOs make the money and now the angel, fund, and VC markets in the U.S. get a model in place like this for them, which is the ICO model.

How will the future look?

I think those U.S. companies planning to do ICOs will have no other chance than to do an ICO via angel.co, assuming they get accepted by them. This is for me a little bit against the core model that is behind all this decentralized liberal market thinking and economics. The other way is, it will happen that the free ICO market cleans up itself by having its hiccups and projects will have to fall flat, so pick wisely.  I am pretty sure that’s just a phase and problem of growth which comes along with each new technology.

Also, how the ICOs are done will change in terms of people no longer throwing money at them when there is literally nothing other than an idea on white paper. Additionally, the ICO contracts will change so that funds are locked into the contracts and are only released in tranches.  If a project falls flat, it sends back the equal value in ethereum or NEO to those addresses holding the tokens whose project run out of business.

PS: Maybe I am just a dreamer and too idealistic to think something can change and that in the end what will be left of this movement is the tech, behind which is the block chain. That will be it from me for today.