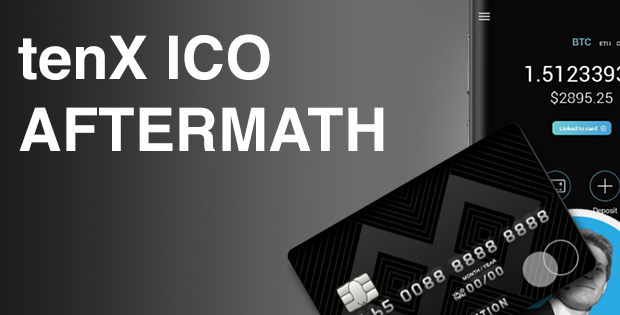 TenX, the company out of Singapore, has been in the media since the end of June thanks to its prominent investors and backers and its enormously successful ICO. It raised in record time 245832 Ether (valued roughly 80 million USD at time of swap). Shortly after its ICO, the whole Ethereum Market tanked, but looking at its current market cap demonstrates that it is doing okay.

What happened since its ICO?

Reno-mated exchange Bittrex (focusing on the western world) and BTC9 (focusing on the Chinese market). Having seen PAY listed on BTC9 did not come as much of a surprise as it seems as if some Chinese pools had their fingers in the game despite having patronage even before the ICO through an investment of Fenbushi Capital where Vitalik Buterin is the general partner. Most of the trading volume occurs on those two exchanges. In terms of trading pairs, the only Crypto to Fiat one is the PAY/CNY on BTC9 on Bitrex.

So far, it’s only PAY/BTC and PAY/ETH. Smaller exchanges such as Liqui, HitBTC, Gatecoin, and the decentralized exchange Ether Delta have listed the company as well, but not much trading is happening. We will see how the price develops, but most of this will be related to the development and reaching of milestones that the company sets for itself.

PS: it is now also listed on changelly.com for those who like it simple and fast. 🙂

The TenX Web app closed beta will begin on the 14 August followed by its IOS closed beta, which will be on the 21 August. It has not given any date for a full public rollout, which the community is waiting for. So far, no updates have been announced about the also very interesting concept of the COMIT NETWORK and how far it is in the process of gaining its own debit card and especially a banking license.

– TenX in the Media

TenX has done an excellent job of communicating with its users and the community via social media channels and especially live video webinars. One of the highlights is the founder being on Bloomberg and giving his perspective on the recent Bitcoin split. Besides this, the company is always quick to react to changes in the market and to potential threats to its business, such as Singapore Monetary issuing a statement that it plans to regulate ICOs in and out of Singapore.

RESUME as of Beginning of August 2017

At the time, everything looks good for the company. If you asked me how far it could go, I would say that if the company really gets together what it proposes in the same way that it got together its ICO, it should be a clear buy. If you asked me whether it would bring you the exorbitant multiple you are hoping for, it is hard to say, as the PAY token already has a high market cap. I see a chance for it if the company is well connected to all the exchanges, is committed, and its COMIT NETWORK infrastructure gets into full swing.

I also have a concern about cryptocurrencies being taxable once they are transferred into real “cash” in some countries. I wonder how TenX will tackle that, as I see this as a threat to its business model, which could mean that people from a vast number of countries will not be allowed to receive a card from the company or would have to go through a pain-in-the-ass process to get one. We will try to get more info on this within the next few weeks.