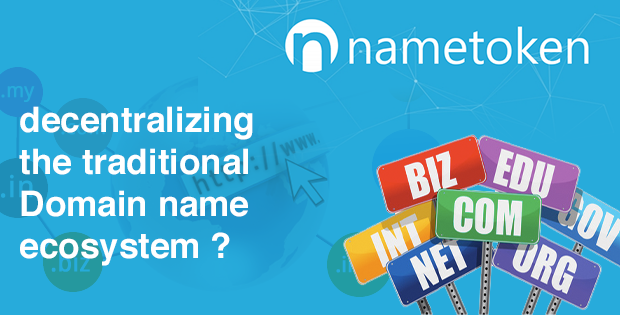 Nametoken is currently offering tokens via crowd sales and wants to raise up to 20,200 BTC, which is around 57 million US dollars.
The Nametoken crew wants to give away 90% of its issued tokens. The Token itself is deflationary, which means 50% of all net profits made will be used for token buybacks and they go to burn those tokens to increase the token market. The other 50% are planned to be used for reinvestments. Nametoken is issued by domain media ltd which is incorporated in the Seychelles.

The mastermind behind the project is the team around Frank Menze and MenzeMedia.de Gmbh. MenzMedia.de Gmbh is an agency in Germany running a couple of projects which include e-commerce sites such as Druckerpatronen.de. Based on Information available on the Twitter Profile of Frank Menze there is a plan on the way to run feinkost.de, pralinen.de and bioprodukte.de, these are all more or less generic popular food related food domain names in the German language. The people which are listed on the Nametoken site seem to be the same people working already under for or around MenzeMedia.de’s projects. A question one could raise how much time the team really can and will spend on the Nametoken project and why the other companies the team runs are located in Germany, but domain media ltd is not registered in Germany.

How we understand the Idea behind Nametoken

Domain media ltd wants to build a domain name marketplace in the style of sedo.de, where people can register, list, park, buy and sell domains. These actions should be portrayed on the blockchain, but for what reason and for what benefit is not totally clear. The Nametoken should be used as well as a payment method for these services on the proposed platform and rewards are given out for those who vote on “promising domains” and data maintenance.

The whitepaper includes basic information and does not go too much into details. 40% of the raised capital should be invested in high-potential domains.
It is not clear if Nametoken holders can vote on which domains Nametoken Crew wants to invest. It would be useful to do this via the blockchain where each Nametoken holder can vote and transparency is guaranteed in what domains the funds are invested in.

Should one go for Nametoken ICO?

The team behind this ICO is definitely experienced in e-commerce and has proper and profound backgrounds in the domain-holding business but there is a risk when the team seems to run other projects as well.The whitepaper is kind of thin and how the token is used is only interesting for a certain type of user. The market they want to tap in is highly competitive due to companies like Sedo and Aftermarket.

They claim to build the first decentralized domain ecosystem, seems more like a domain marketplace to me. Based on the information I have through the Whitepaper on can ask the question: “How the blockchain should bring substantial value to the project as it is planned?”  Another thing I am a little bit scared is the vast amount domain media ltd aka Nametoken wants to collect. We will see how Namecoin will do with its token sales, as well as if and how they reach their target. My personal opinion is, the concept would need to have a little bit more substance in terms of blockchain usage, a better drafted white paper and preferably a working prototype as well to make it more appealing.